After allegedly hearing God’s voice commanding him to rebuild the Christian church and live in poverty, Saint Francis of Assisi abandoned a life of luxury for a life devoted to Christianity. He is the patron saint of environmentalists.

Who Was Saint Francis of Assisi?

Saint Francis of Assisi, who was born in Italy around 1181, was known for drinking and partying in his youth. Francis was captured and imprisoned for ransom after fighting in a war between Assisi and Perugia. He was imprisoned for about a year while waiting for his father’s payment and, according to mythology, began seeing visions from God. After being released from jail, Francis heard Christ’s voice telling him to rebuild the Christian Church and live a life of poverty. As a result, he gave up his life of luxury and became a devout Christian, his fame spreading throughout the Christian world. 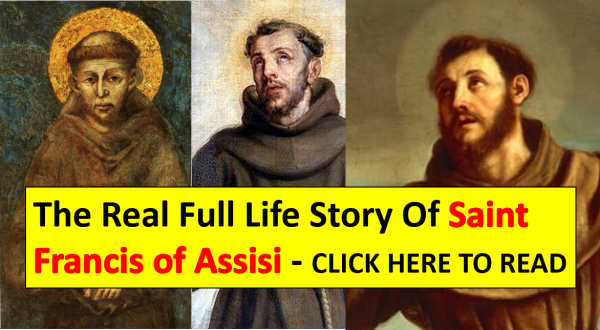 Later in life, Francis allegedly had a vision that left him with the stigmata of Christ – markings matching the wounds Jesus Christ sustained when he was killed — making him the first person to receive such sacred wounds. On July 16, 1228, he was declared a saint. Throughout his life, he developed a strong love of nature and animals, and he is known as the patron saint of the environment and animals; his life and teachings have had a lasting resonance with millions of followers worldwide. On his feast day in October, many animals all around the world are blessed.

Saint Francis of Assisi, born in 1181 in Assisi, duchy of Spoleto, Italy, began his life as a convicted sinner. His father was a wealthy cloth merchant with farmland near Assisi, and his mother was a lovely Frenchwoman. During his youth, Francis was not in want; he was spoilt, enjoying himself with exquisite food, wine, and wild parties. By the age of 14, he had dropped out of school and gained a reputation as a wayward adolescent who frequently drank, partied, and violated the municipal curfew. He was also well-known for his wit and vanity.

Francis of Assisi mastered archery, wrestling, and horsemanship in these wealthy circumstances. He was expected to follow his father into the family textile business, but the prospect of a life in the fabric trade bored him. Instead of planning a future as a trader, Francis began fantasizing about becoming a knight; knights were Medieval action heroes, and if Francis had any desire, it was to be a war hero like them. It wouldn’t be long until the possibility for conflict arose.

When conflict broke out between Assisi and Perugia in 1202, Francis eagerly joined the cavalry. He had no idea at the time how much his wartime experience would shape him for the rest of his life.

When Francis and the men of Assisi came under strong attack, they fled in the face of overwhelming numbers. The entire battlefield was soon covered in murdered, mangled men howling in anguish. The majority of the surviving Assisi troops were executed right away.

Francis, who was unskilled and had no fighting experience, was immediately apprehended by opposing soldiers. He was dressed like an aristocrat and wore expensive new armor, and he was thought to be worth a substantial ransom, so the troops chose to spare his life. He and the other rich troops were kidnapped and led to a dismal basement cell. Francis would spend over a year in such deplorable conditions, awaiting payment from his father, during which time he could have contracted a fatal sickness. During this period, he also began to have visions from God, he would later report.

Francis’ ransom was accepted after a year of negotiations, and he was released from prison in 1203. Francis, on the other hand, was a very different man when he returned to Assisi. When he returned, he was critically ill in both mind and body – a battle-fatigued war casualty.

According to folklore, Francis came across a leper while riding his horse through the nearby countryside. Prior to the war, Francis would have fled away from the leper, but on this occasion, he acted totally differently. Seeing the leper as a sign of moral consciousness — or, according to some religious experts, as Jesus in disguise — he embraced and kissed him, later describing the event as a feeling of sweetness in his mouth. After this encounter, Francis had an incredible sense of liberation. His previous way of life had lost all appeal.